Mim is an Oxford based photographer who specialises in natural light work — no light rigs, no studios. She has a great sense for capturing the personality of a subject and especially in drawing out connection and the magic of the moment. 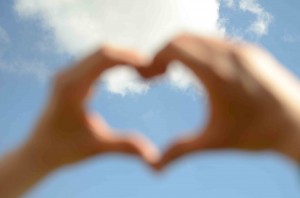 She’s caught the evolving warmth between people: people lost in a hug, sometimes a bit shy or curious. I particularly like those people caught in a playful moment: I remember watching the naked dash across the Long Field when I was having tea in Pachamamas on Saturday afternoon! Mim has captured what I recall of the joyous absurdity of the moment.

There are many fleeting details in her work — raindrops from bunting, huge bubbles, children leaping the labyrinth path — and lush colour in others — a family in bright raincoats and a evening inside Small World.

Mim says she took the image in this page just as they were leaving site. She asked her partner to hold his hands up to the sky: “It was how we felt, leaving such a wonderful and fulfilling weekend.”

Mim also has a blog and a Facebook page.

I have always found it difficult to talk about my feelings, if there is something bothering me I will keep it as buried as possible. This is not a good habit of mine something that being with Buddhafield has foreced me to really try and change.

I always write, if you want any kind of insight into who I am and who I have been in my life read my poems. The are full of states of mind, feelings, actions, and words that I cannot speak out loud. I feel like a can understand my states of mind better when I watch my pen writing it down and turning it into imagery. There have been times, and I have written of it often, that my pen or pencil becomes separate from my being. As I watch the ink flow out onto paper my mind calms down.
What I write is not about having some amazing epic poem at the end of it but of its process. I started writing as a teenager in college, and in my first year at Brighton University I went though a really creative stage. I wrote everything down and found mysef being inspired often. I love reading what I wrote then as I can see how much I have moved on. I have not written for such a long time, the odd pearl of wisdom came to me occasionally, but for a long while my state of mind was not at its best and I found writing to be frustrating more then anything. Nothing inspired me and if something did I couldn’t find the words to express it properly. There was much of the same feelings going on, trying to break out of the cyclicar patterns I found myself in was really hard. This was not changed until I changed my environment last year. That was what I needed to leap out of the vortex that had me trapped.

Here are three of my poems.

Inspirational Stirrings
Interesting lines in need of attention
And many more to add to my collection.
A single tree in a far off hedgerow
Soft rain on my toes.
I will heat my body up to sweat
And cool it down on damp grass.
I will watch the shadows write these words
That come from depths or outer regions.
Tensions high and thoughts entangled
My work stunted. Stop.

Push the right buttons, write the right phrases.
To tease out the boundaries, over and out.
Nonsenical ramblings and half finished poems.
Wonderful compliments to expand on.
Inspiration stirrings don’t come to fruition but get knocked out by numbness.
How to start after months or years of nothingness.
How to stop a battle raging and start again.
People who listen but do they hear,
A fear rising every time its my turn,
It’s a choice between truth or tears or
Closing it off and smiling OK
Astrological charts, intuitive thining, intentions and guides.
So much to think apon, act apon.

Stunted again at first chance of expression, fall back inward
So rest it will take a while.
ljmh July 2010

I believe, I believe

>For this first post in our ‘Artist’s Corner’ series, I will be writing about the natural artist Andy Goldsworthy. I think his art is really relevant to us as Buddhists, as it is rooted in awareness of surroundings and the natural world. We strive all the time to be aware, of how we feel, what we are doing, what we are looking at, and Goldsworthy’s outdoor natural sculptures are the product of such awareness. To create sculptures such as
the one below, named ‘Rowan Leaves with Hole’, takes hours of being in a constant state of meditative awareness, which is a state that we, as Buddhists, try to live within. Goldsworthy’s work fills me with awe, also reminding me that the world is an achingly beautiful place, and if we work with it, in non-destructive ways, we can create things that are truly wonderous. This doesn’t just apply to art, but to everything, from buildings, to festivals, to food, and strikes me as being intrinsic to mine and Lou’s chosen way of life. His work also makes me think about the reality of change, the sculptures themselves decaying and changing along with the landscape that they are part of. His work brings back into the foreground of my mind how everything, including myself, is changing constantly, and how there is nothing I can do to stop that, and so the best thing I can do is embrace it, love the changes and keep going.
Here is a selection of his work, these pictures are a few of the ones that caught me most strongly, the ones that made me stop and catch my breath, the ones that made me feel, made me be in the moment. 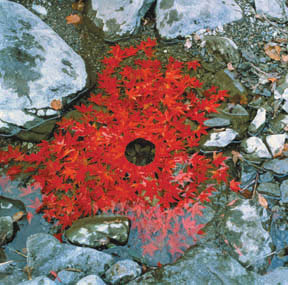 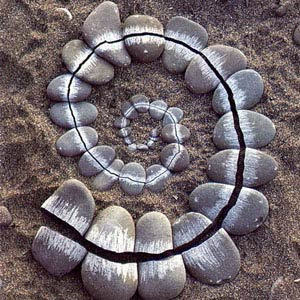 Related links:
Interesting article in the Observer, another one in the Telegraph, part of the documentary on his work, called ‘Rivers and Tides: Andy Goldsworthy working with Time’, and the Online Digital Catalogue of his work. Go have a look! I bet you will find something that takes your breath away!

>And so here is another installment in the saga of my internet addiction! I am really trying to not just browse mindlessly, unaware of time passing by, but to search out subjects that I think will expand my mind and get my thoughts racing and jumping about, making new connections and helping me grow.

DharmaLife magazine was published and archived by the FWBO, and online has a selection of articles from each edition. Sadly it has stopped being published, which I am upset by as yesterday afternoon I devoured many of the articles they had online, and want to read more! Favourites include Sangharakshita talking about his current life and his legacy, I find it fascinating to think that I am part of a movement that is still in its early stages and that the guy who started it all is still alive! We can ask him questions and talk to him! It just makes it all seem so much more open and relevant, less intimidating and less rigid. I think I would quite like to meet Sangharakshita, but I have no idea what I would say or ask, I think maybe I want to meet him so that I know he’s real? I dont know. Anyway, my other favourite article is Lalitaraja’s piece on the links between dance and meditation – I love dance meditation with all my heart, it is a really good way into meditation for me, it really gets me going in a way no other meditation has done so…yet! I did Jewels Wingfield’s Ecstatic Dance at Buddhafield 2009 and then went to both of the ones she did at Buddhafield 2010, and more recently, the newly ordained Diajyoti held a dance meditation session at the Buddhafield Team Retreat at Easterbrook which was amazing! Hopfully she will be doing more of these!

Sewing as meditation. This site is a scrapbook/notebook/record of one woman’s creation of cloth, by hand from other scraps. She calls it ‘slowcloth’, where the process of making it is just as important as the finnished piece. Each cloth tells a story, has a story sewn into it, and this site beautifully tracks the process. I was taught to sew at an early age, and though I never really connected with it when I was younger, in the past year or so I have become closer to it, and find it very peaceful and meditative. This woman inspires me – I hope one day I will have a little studio in the woods just like her!

I love poetry. This woman writes a poem a day, and they are all so beautiful. They are full of space, and I find that after I read one I need to take a few minutes to be in the poem, to understand it, and take it in. A really meditative experience.

Here modern photos and archived photos of the Second World War are combined to, in the words of the creator, ‘show the horrors of war to people so that it can help prevent wars again’. These photos are fascinating and at the same time haunting and horrifying, showing, for example, the combination of laughing tourists taking photos of the Eiffel Tower, while a sepia tinted Adolf Hitler and officers pose malevelently in the background. It sends a shudder down my spine, but also brings me back to the idea that we need to be aware of what is happening, and not happening, in the world so that we can try to make sure nothing like that ever happens again.

Everything passes away, even art. This links to pictures of street art in Paris, taped to walls around the city these cardboard pieces are free to whoever wants to take them, be it the wind, rain or people. It’s a good lesson in letting go I think.

Hope there’s something there to interest you 🙂
Any recommendations?

Do you wander with words or ponder with paint? Do you still your mind through music or dance? What do you find beautiful that stirs your imagination and devotion?

We are starting a monthly ‘Artist’s Corner’ post where we want to know about your creative practises and devotional inspirations.

It can be anything from carving to knitting, from writing to singing, or even just walking in the woods. We will post pictures or poems be they your own or someone elses as long as you write a few words to say why and how it is something that helps to bring on that stillness. Send you reviews, stories, inspirations to us at blog@buddhafield.com

The first official post will be at the end of December and then the end of each month from then after.

“Let the beauty we love be what we do”
Rumi