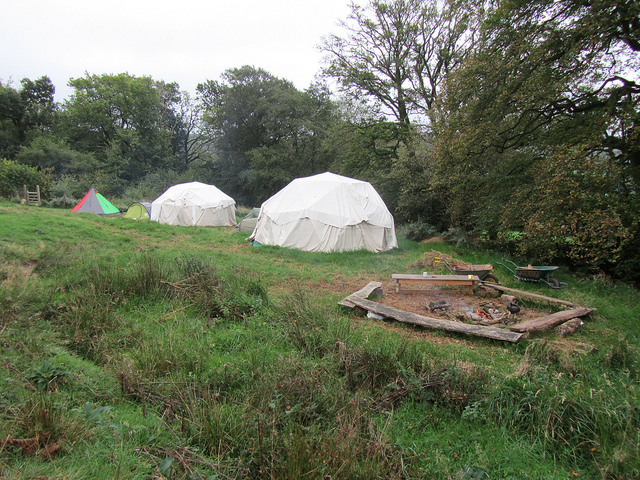 Every year, in the cold of the winter, when the sap is down and the trees asleep, I go into the woods to cut hazel.   I hunt for the straight coppice poles that Buddhafield needs to keep our domes standing – cut while the trees are sleeping, so that in the spring new shoots will grow when the sap rises with the warmth of the sun.

In Buddhafield, we built our first domes back in the 90s, when we started to run retreats in the woods and borrowed fields.    Following the example of Jacob Jones – who still brings domes to the festival – we built benders and domes to house those retreats.   Then we discovered and started to build the ‘parthanon’ structures, based on an ex-army tent we bought one year – but that’s another story…

We now have one big 30 foot dome and eight 16 foot ‘standard’ domes.  These provide the shrine space, sleeping and meeting spaces we need on retreat and for teams working at the festivals.  It’s fair to say – that I love them all! 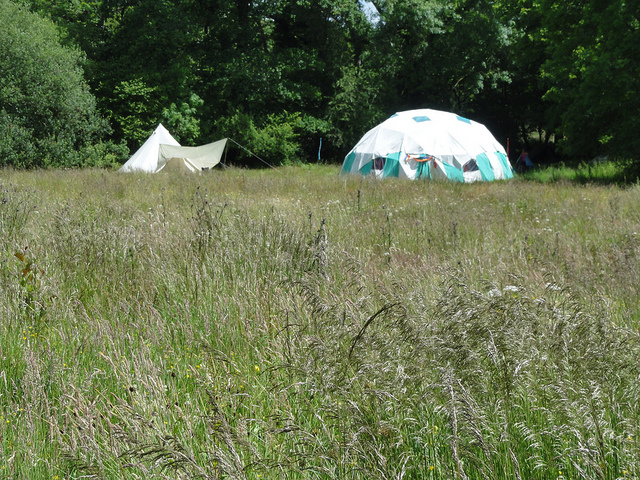 So every winter the poles that make up these domes are pulled out of storage, unwrapped – and brought back to life for the year to come.   Every year, within their wraps and ropes, hides a mixed mess of muddy, dusty poles, with snapped strings, broken ends, some just missing from their dome sets, the doors scattered and stray poles all mixed and confused.    They have drawing pins, screws and random staples, twists of string and gaffer tape – they’re not happy domes.

At present our domes have around 650 poles – and every one is checked over, the mud scraped off, staples, random tape and drawing pins removed.  The broken poles, with snapped ends, pulled out for replacement, some re-used to replace missing short poles, some being replaced with freshly cut and stripped poles from the hazel harvest.

Then I bring them to life – with heated linseed oil (mixed with turps, to aid penetration), strong gloves and a scrap of towel.  As each pole is massaged with the oil – the dull and dusty poles start to gleam and shine again, so keeping them flexible and ready for the fields.   Many poles are beautiful, their unique details and colour brought out by the oil.  And every year they get a little darker. 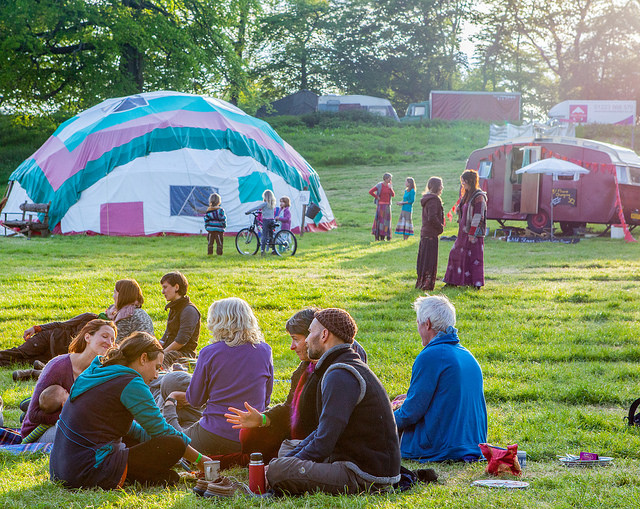 650 poles… It’s long and sometimes tedious work you’d think.  But it is not boring – as every pole is an individual with a story and history revealed by the oil.   Within the stack of drying poles are remnants of the first domes, near 20 years ago –  holes still there from the ring screws that used to be tied together to form their domes, large holes from when they were also tied together.  These poles are dark with glowing lumps and bumps that gleam like old oak.  They were cut from hedges and wild hazel bushes – and are twisted with many side branches, some still showing marks from files and billhooks.   Among them also are two ‘broomstick’ domes, distinct, smooth poles, that pack tight.  There are, here and there, still a few pine poles, roughly rounded once square cut shafts that, being pine, often break.  There is another donated dome of startlingly thin, unstripped poles, fitted with plastic ends for wingnuts and bolts rather than the gas pipe rings of most of them.
Then the domes built in our ‘mature’ years – mostly poles cut from trained coppice stumps, grown deep in the woods, smoothly stripped and trimmed with drawknives, showing fewer side branches, though still with many interesting kinks – or spirals from the eagerly hunted ‘honeysuckle twists’.

Then came the last two domes, with moulded plastic ends made from re-used gas and water pipe.  Fixed together with bolts and wingnuts, this new style allowed for the tighter tolerances of the big dome, that I built in 2007 for the Total Immersion retreat shrine.  Liking the new style, I got approval to build another standard dome – which brings us to eight..   Around that time too, the ‘elders’ noted climbing through a low triangle door was awkward at times.  So I experimented with fitting door frames into the domes.  It took a few tries – but now we have stable doorways for the big dome and five other domes – the parts of which still perplex our volunteers.  They’ll learn… 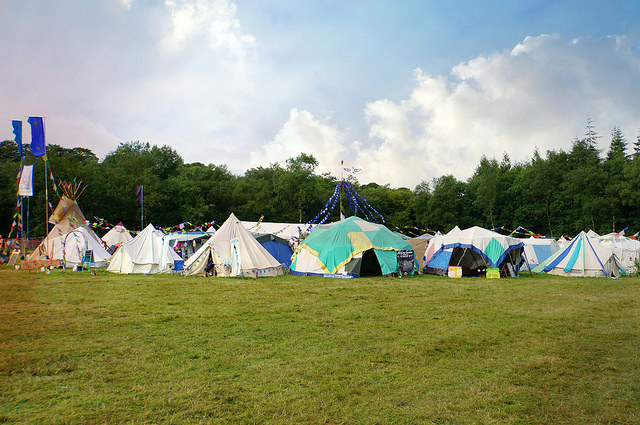 I’ve said nothing of the canvas that covers these domes.  That’s a story that Trevor and others could tell, from the days of using second-hand marque canvases to buying our first industrial sewing machine, to making our own dome and parthenon covers, then getting them tested and approved – but that is another tale.

So now the domes are back at base, re-sorted into complete sets, showing the occasional brand new pole, all tightly wrapped and bagged, glowing and ready for the sun to return and Buddhafield’s life in the woods and fields to start afresh for another year.