Kamalashila lives in West Hampstead, London, with Dharmacharini Yashobodhi. In 1974 he was ordained into the Triratna Buddhist Order by Urgyen Sangharakshita who gave him his Dharma name, “Kamalashila” — “He whose conduct (śila, Sanskrit) is like a red lotus (kamala)”. He’s the author of Buddhist Meditation: Tranquillity, Imagination and Insight (Windhorse Publications, 3rd Revised edition edition 2012) and leading this year’s Buddhafield Total Immersion Retreat, a month-long, silent meditation camping retreat in Devon.

He is by temperament rather shy, quiet and thoughtful, but he has been active for forty years teaching meditation, establishing communities, writing and leading Dharma study. In 1976 he founded the West London Buddhist Centre near Earls Court; he moved to Wales in 1979 and became a founder of Vajraloka Meditation Centre and later Vajrakuta, Triratna’s first residential Dharma study centre. He also has longstanding connections with Buddhafield and EcoDharma.

This is a talk he gave to members of the Triratna Buddhist Order (then still known as the Western Buddhist Order) in 2005. Some of the themes he covers are very relevant to Buddhafield’s Green Earth Awakening Camp (May 16–21 2014).

You can find this and many other talks by Kamalashila on Free Buddhist Audio.

3. A personal experience of participation in nature; nature and Buddha Nature; alienation from the natural world (4:52).

4. Deep ecology as a way to insight; changing our sense of identity and ownership; deep ecology and ethics (4:26).

5. Aldo Leopold; owning beings and land as unethical; the experience of being in the countryside; meditation and the “Four Great Elements” — “Mahabhutas”; nature and seeing beyond ego (8:40).

6. Transcending self & other; our limited idea of “all beings” and the experience of other creatures (3:07).

7. Not dismissing non-humans; relative separation from the natural world; anthropocentrism versus ecocentrism; awareness of non-human beings and ethics (5:33).

8. Communal living; single sex; the underside of the development of communities; mixed communities and the benefits of other mixed environments (4:31).

Where better to be on a sunny bank holiday weekend at the end of May [23—27; Green Earth Awakening Camp 2013] than in a field in the Blackdown Hills near Taunton with Buddhafield? About 150 people gathered together to share skills and inspiration for living a greener, more connected and more satisfying life. The gathering coincided with Wesak, the celebration of the Buddha’s enlightenment and a glorious full moon over the beautiful tree-lined fields.

There was a spacious and varied programme of activities and workshops, meditation, ritual, talks, music, eating together, camp fire, sauna and sun bathing opportunities. From the many craft activities and workshops on offer I explored just a few. I was inspired by a talk on Permaculture, spent an absorbing morning carving a spoon from a beautiful piece of wood, then drew some energy from the earth to dance like a dakini. For me, one of the highlights was a talk by Akasati on The Wisdom of Letting Go Revealed in the Story of the Buddha’s Enlightenment. Akasati described how the soon-to-be Buddha, Gautama, had followed a path of deprivation and mortification of the body, before admitting that this approach was bringing him close to death rather than enlightenment. He let go of the status he had achieved amongst his fellow ascetics and instead sought another way. The story shows us, explained Akasati, that we too may do well to let go of ideas, attitudes or views of ourselves that no longer serve us well. This can be difficult, giving rise to fearfulness, but our practice can help us draw courage to change, and reinvent ourselves. Maybe I can start with letting go of small things in order to train myself for a larger letting go? Akasati explained that seeking awakening is about letting go of our experience of a divide between self and other. 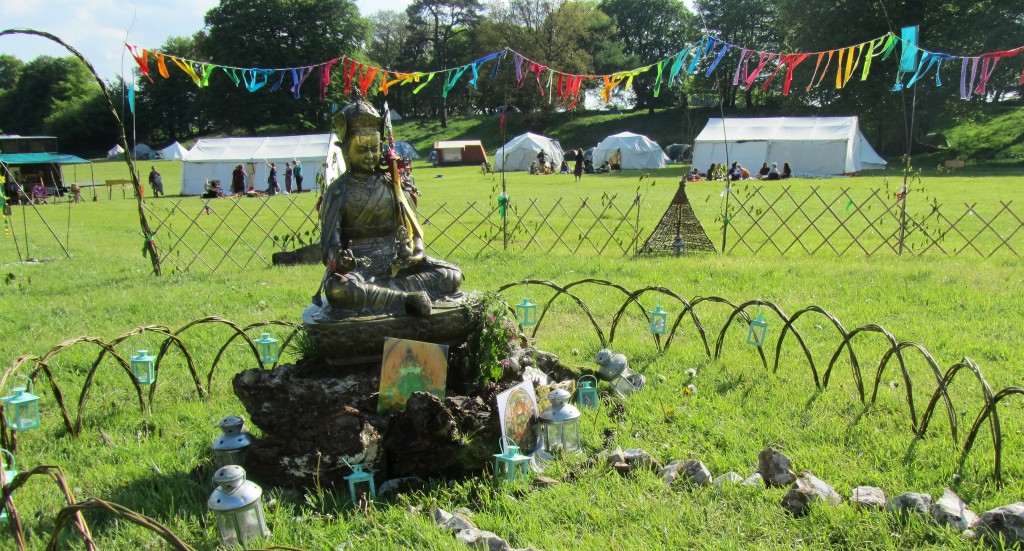 Lying on my back on the grass, gazing up at a blue sky, watching some birds high above, that divide dissolved away for a few moments. I can see the merit of living closer to the earth, away from the concrete and pavements of the city, enjoying the simple absorbing activity of shaping a piece of wood with a knife. Even if I haven’t let go enough yet to walk away from life and work in the city, I am deeply grateful to Buddhafield for giving me the experience of simple and connected living for a few days. This experience was even deeper for me on a Buddhafield retreat that I joined at the beginning of May, when we camped in the Ashdown forest in Sussex. After a week there I felt a strong connection with the trees and the many living beings in the forest, including my fellow retreatants and the ants.

Back home in Norwich, I’m now looking forward to my next Buddhafield experience — the Buddhafield Festival from 17 to 21 July. I hope to see some of you there!

Danceitation’s first week long retreat this August! Calling all dancers, meditators and musicians! A few weeks ago Jayagita was asked if she’d like to make Danceitation the central theme of The Big Fat Buddha retreat with the Buddhafield team. Of course she said “Yes!” so make room in your diary from August 31st to September 7th 2012! We call it a retreat, but it has a real mini-festival feel about it with around 100 to 150 people. Held in the beautiful Dartmoor countryside we’ll all be camping with opportunity to meditate in the more formal sense and of course lots of Danceitation with at least 3 DJ’d sets and two sets of live improvised music with all the musicians that attend the retreat. Do let your friends know, musicians and dancers alike and hopefully see you there. It’s very reasonably priced, but if you are short of funds please get in touch with Buddhafield Team and talk it through with them. Book now through the Buddhafield website.