This is our second GEA; what have you changed this year?
I think last year worked quite well having spaces in the programme where people could be together outside of the workshops. But I’d like to see more of that: last year it was still quite tight; lunch was a narrow window in relation to time slots for the programme. I want more crafts, more independent spaces, more transferable skills; someone should be able learn something at the GEA, go home and do it. That feels like more of a life changing experience: they have that wow! moment, where they walk away and feel that they’ve accomplished something. People could feel that they’re going on a journey through the event, rather than “Oh! I’ve got a slot now; lets get to the blacksmith!” I’m aiming to pull it all together with a bit more of an emphasis on the theme. The Dharma talks are what will underpin it, really good speakers that embrace the theme. 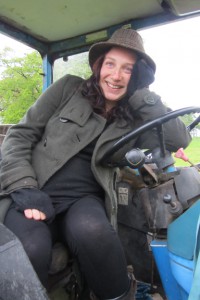 What do you see the difference between the Buddhafield Festival’s Permaculture Area, and the GEA?
I’m actually trying to make a connection more obvious. At the Buddhafield Festival we have the Dharma Parlour over there and Permaculture over here. In my view they should be in the same space. So trying to to get that link in, that it’s not about doing your green crafts, then trying to get your meditation in. The two are so fundamentally linked, that the only way change can happen in the future is that people recognise that we are so fundamentally linked.

We’ve talked about linking the theme to this year’s Triratna International Retreat: The Bodhisattva’s Reply; I suppose we’re training our Bodhisattvas aren’t we?
Yes, yes I think so. Individual input into the world, so to speak, in relation to other individuals. It links in with the prophecy of the Shambhala Warrior: “The Shambhala workers go into the corridors of power armed with the only tools that the barbarians don’t understand, and for which there is no defence. The tools of the Shambhala workers are compassion for all, and knowledge of the connectedness of all things. Both are necessary.” The Bodhisattva vow came up quite a lot last year and just hit the spot for me: this is about all of us standing up and facing the world for each other, that it’s all our responsibility. One person can make a difference; believe in that. It’s not a question of feeling a horror of what’s going on in the world and needing to do something about it, of feeling responsible and therefore we “should”. It’s to do with the sense of deep ecology, that we’re so interconnected that there’s no way of standing outside from it, we are part of it. You’re breathing, so you have to do something. And that was the root of it for me, the notion of deep ecology , of it being so obviously Dharmic.

Horrified anxiety isn’t the fuel for the future, then?
No. A love and a compassion, and a will, and a “wow! I’m part of this!”. Protests, activism and the need for social change, can really emphasise the devastation … but the connection, that’s got to be the compassion of moving forward. So that’s why the Dharma Parlour and Permaculture Areas are moving forward together. In the Buddhafield Festival Permaculture Area, we’ve got Green Crafts and we’ve got Social Change, so in a sense the GEA is an extension of that, but a lot more in depth.

The GEA is increasing the sense of intimacy?
Yes, at the Buddhafield Festival people do become ships passing in the night; you’ve got your timetable, you jot your workshops down on the back of your hand, you’re running to the next thing. Whereas with a structured timetable, you’re eating together, you have a chance to network and I think that’s really important; like-minded people, people who feel the way you do, get into groups together and that brings a sense of community. You’re doing it together. You go to one workshop and feel really moved, go to the next one and it might be the same group of people. And I think in that sense you’re not alone. I think that can be quite powerful. So I’m hoping that that’s different from a Permaculture Area at the Festival.

Kamalashila lives in West Hampstead, London, with Dharmacharini Yashobodhi. In 1974 he was ordained into the Triratna Buddhist Order by Urgyen Sangharakshita who gave him his Dharma name, “Kamalashila” — “He whose conduct (śila, Sanskrit) is like a red lotus (kamala)”. He’s the author of Buddhist Meditation: Tranquillity, Imagination and Insight (Windhorse Publications, 3rd Revised edition edition 2012) and leading this year’s Buddhafield Total Immersion Retreat, a month-long, silent meditation camping retreat in Devon.

He is by temperament rather shy, quiet and thoughtful, but he has been active for forty years teaching meditation, establishing communities, writing and leading Dharma study. In 1976 he founded the West London Buddhist Centre near Earls Court; he moved to Wales in 1979 and became a founder of Vajraloka Meditation Centre and later Vajrakuta, Triratna’s first residential Dharma study centre. He also has longstanding connections with Buddhafield and EcoDharma.

This is a talk he gave to members of the Triratna Buddhist Order (then still known as the Western Buddhist Order) in 2005. Some of the themes he covers are very relevant to Buddhafield’s Green Earth Awakening Camp (May 16–21 2014).

You can find this and many other talks by Kamalashila on Free Buddhist Audio.

3. A personal experience of participation in nature; nature and Buddha Nature; alienation from the natural world (4:52).

4. Deep ecology as a way to insight; changing our sense of identity and ownership; deep ecology and ethics (4:26).

5. Aldo Leopold; owning beings and land as unethical; the experience of being in the countryside; meditation and the “Four Great Elements” — “Mahabhutas”; nature and seeing beyond ego (8:40).

6. Transcending self & other; our limited idea of “all beings” and the experience of other creatures (3:07).

7. Not dismissing non-humans; relative separation from the natural world; anthropocentrism versus ecocentrism; awareness of non-human beings and ethics (5:33).

8. Communal living; single sex; the underside of the development of communities; mixed communities and the benefits of other mixed environments (4:31).