The gate of the Dharma does not close behind us to secure us in a cloistered existence aloof from the turbulence and suffering of samsara, so much as it leads us out into a life of risk for the sake of all beings.
Joanna Macy

I first encountered Buddhism within the flapping canvas of a Buddhafield dome. My first meditations were amongst the damp mist of a frost tipped Devon field. The backdrop to my Buddhist practice has been England, outside, with the green and wind. This context brought me to question our alienation from the delicate play of atom affecting atom within a cooperative environment without name and species and institution. Buddhism has shaped my mental practice, and our current cultural climate has built my assertion that to move beyond an exhausted consumer society, intent on polluting planet and thought, we need the dharma; a philosophical tool to re-integrate a disembodied mind. 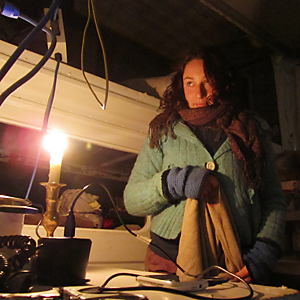 The western mind has, over time become separated from its origins, somehow autonomous from its environment. Sitting like a great head, without body and history, not relating to, but observing its linear relationships. A belief in a mind body duality existed from Plato to Descartes right up until the 19th century when existentialism broke the pedestal on which man had placed himself. Phenomenologist Merleau-Ponty went further to suggest the mind is encased within the body and all experience felt through that vehicle. Western philosophy has evolved towards a rejection of dualism and can be seen to align with certain aspects of eastern philosophies with an underlying oneness or interconnection of organisms.

Though many differences remain between the influences of western and eastern culture, Buddhism’s essential teachings take relevance in modern society as a paradigm shift emerges. We are recognising the damaging effect an affluent, contaminating society has had on its landscapes and inhabitants. The terms ‘green’ and ‘eco’ are marking a cultural move toward a sustainable relationship with the planet. But no amounts of biodegradable nappies are going to save the irrevocable damage caused to our finite resources. We need a revolution in mental processes. We need a break down of the damaging concept of ‘I,’ that enslaves us into craving more to the detriment of others. We need a radical transformation of how we view ourselves and our relationship to the planet.

Part of the fundamental teachings of the Buddha, along with impermanence and un-satisfactoriness, is the anaatman or ‘no self.’ This teaching defines us as a continually fluctuating system of processes; an interconnected web of effect and affect. By allowing the edges of what we perceive as ‘I’ to blur into an endless myriad of interconnected organisation, we cannot uphold a perception of an individual autonomous mind. By recognising our influences on our environment and the simultaneous influences our environment has on us, we can understand a duty to uphold an ethical way of being. This can be known as karma.

The notion of karma can be easily related to the principles of ecology; that all life is a complex interplay of cause and effect. Our karma, or our effect, will bounce on through the web of relationships that so delicately impress one another. Deep ecology and holistic science have grown from an understanding that all systems are comprised of sub systems and an exchange of information happens in a complex non-linear response. This is a step beyond the reductionist interpretation of nature associated with a ‘conventional’ western, scientific mind.

As the Mahayana Buddhist tradition states, we all have a ‘buddha’ nature’; a potential towards enlightenment. Our ignorance and delusion is strongly embedded, but if we cultivate enough self-conscious awareness to break through a rigid sense of identity, we can communally reach an enlightened state of existence. Mahayana is translated as ‘Great Vehicle,’ a means by which all sentient beings can attain enlightenment. One’s own spiritual journey is therefore intrinsically linked with liberation for all.

Find out more about the Green Earth Awakening Camp 2013.