As Louise said last week, we are both ‘beginner Buddhists’ and these study nights are invaluable to our first steps along the right path. Again, Vidyadasi led this group and held the space really well. I feel like a lot of my questions were answered! 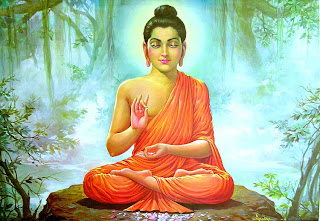 Enlightenment – The Goal of Buddhism

Traditionally, Enlightenment is said to consist of three main things. Firstly, it is a state of clear, pure awareness. Some schools of Buddhism claim that within Enlightenment the subject/object duality is no longer experienced, that the Enlightened one sees no difference between himself and others, between ‘out there’ and ‘in here’. There is just awareness. This awareness is an awareness of things as they really are, which is seeing all things clearly and truly, without the delusion, obscurity, prejudice and mental conditioning that all humans experience the world through. It is direct spiritual vision of the reality of our existence, also referred to as a state of knowledge, or an awareness of Reality.

Secondly, Enlightenment is referred to as a state of intense, over flowing love and compassion. It is often compared to the love between a mother and child, as in the Metta Sutta, ‘the Discourse of Loving Kindness’, which says ‘Just as a mother protects her only son even at the cost of his own life, so should one develop a mind of all-embracing love towards all other living beings’ . The attitude is one which the WBO endeavors to cultivate, the Metta Bhavana, (Metta meaning lovingkindness and Bhavana, meaning cultivation or development) being one of the two key meditation practices within the movement. This lovingkindness is not just directed towards human beings but towards all ‘living’, that is, sentient beings and also manifests itself in a deep desire that all beings should gain Enlightenment, thus being set free from all their suffering.

Thirdly, Enlightenment is also described as a state or experience of ‘inexhaustible mental and spiritual energy’, and ‘a state of uninterrupted creativity’.  It is an experience of perfect freedom from all the conditioned limitations which humans construct for themselves, such as attachment to the self, hate, expectations, attachment to others and many more!

Within us all are the seed of enlightenment; we all have love in our hearts, and feel compassion for others, we all have some experience of Reality, we all have some energy. We already have enlightened qualities within us, and it is this that shows us that Enlightenment is the ideal towards which we should aspire. When we feel love and compassion, when we are tackling a project with creative energy, when we are able to rise above our conditioning and start to see things as they are, we feel a serenity which is missing from our everyday lives. This is our glimpse of Enlightenment. Within Enlightenment these qualities are developed to a degree that we can hardly understand, but it is our possession of these qualities, however slight, that gives us a natural affinity with the idea of Enlightenment, and the ability to achieve it. When Enlightenment is talked about, when love and compassion, energy and Reality are talked about we can feel something, we can feel a connection to them, the seeds are within us already. We can tell that Enlightenment is the natural ideal for us too because nothing else can satisfy us. No matter how many things we own, how much money and material safety we have, how many achievements we obtain, there is something within that is not satisfied, that can only be satisfied by seeing the truth of things. This feeling of unsatisfactoriness is called, in Buddhism, dukkha.

There are three forms of dukkha. The first is ‘the suffering which is suffering’, this is when, for example, we cut our finger, or if someone disappoints us. The next is ‘suffering by way of transformation’. This is when we obtain something, get pleasure from it and then lose it. because we have become attached to it, we suffer when it is gone. This suffering comes about as a result of change and time. Lastly, there is ‘the suffering of conditioned existance itself’, which is the suffering of everything which is not Enlightenment.

The ideal of Enlightenment comes from us from humankind itself, from the ever present struggle to understand ourselves and the suffering we live with and to rise above it. We struggle to grow, to develop, but to do this properly, we need an ideal to consciously aim towards. For us, growth means a growth in awareness, of ourselves and of our surroundings and the ideal of Enlightenment gives us direction.

In the extract from ‘The Ideal of Human Enlightenment’ by Sangharakshita which we used for the study and from which all quotes are taken, he says that ‘if we look back in history we can see various people who have actually achieved Enlightenment.’, however, he doesn’t name any, and after searching the internet I found no concrete names of people who are Enlightened now. This raises some interesting questions for me, such as, if part of being Enlightened is a deep desire for others to gain Enlightenment then surely you would reveal yourself to be Enlightened and try to teach others like the Buddha did? Revealing yourself to be Enlightened would be key to this as it would make teaching people and bringing them closer to Enlightenment easier as they would give more weight to your words knowing you were Enlightened. The fact that I couldn’t find any information about Enlightened people now raises doubts in the rational part of my mind, but I still feel very strongly connected to the ideal of Enlightenment, and do connect with it spiritually as something to aim for. I think that I need more discussion on this part of the subject!

Having been brought up as a Jehovah’s Witness my tendency is to think in theistic terms, that is, in terms of a god who has created the universe and who governs it. This is not so useful when looking at Buddhism, as the Buddha was a man who, through gaining enlightenment, woke up and began to experience reality as it truly is. The very word ‘Buddha’ means ‘he who is awake’. The emphasis on the fact that Buddha started life as an ordinary man really helped me to start to see Enlightenment as something attainable. I began to see that the Buddha was an extra-ordinary man, one who surpassed his conditioning through his own efforts, and thus, becoming a Buddha was something I could do too – I’m not sure about my chances in this lifetime though!

Beginning to see the Buddha in evolutionary terms, as the next stage of man, has helped me feel a deeper connection to Buddhism. Due to my upbringing and subsequent rejection of the Jehovah’s Witnesses Faith I have a unconscious negative reaction to religion and the idea of god, and have found that this has been holding me back somewhat in my learning. Seeing the Buddha as the next stage of evolution of man, along with other things I have learned have helped me start to overcome my resistance.