>From the 19th to the 26th November I attended a writing retreat at the TaraLoka Women’s Retreat Centre near the north border of Wales, about an hour from Manchester. Having been on team retreats with Buddhafield, and a 10 day silent meditation course at the Vipassana Dharma Dhippa centre, experiences at either end of the spectrum – Team Retreats being quite relaxed, while Vipassana was very disciplined – I wasn’t sure what to expect. The retreat was led by Samantabhadhri, who lives at TaraLoka full time, Kavyasiddhi, a writer whose plays are often heard on Radio 4, and Mumukshu, who I live and work with in the Buddhafield Café. This review just scrapes the surface of my experience at TaraLoka, so many things happened which were truly wonderful, that there is no way I could write them all down. This is just an attempt to share my experience.

TaraLoka is a beautiful retreat centre on the Welsh/Shropshire boarder. In 1985, an old farm and its surrounding land was bought and gradually, a team of women converted it into the beautiful centre that is there today. There is a white community house  a way away from the retreat centre in which the retreat team live. The retreat centre itself consists of two buildings, one which contains the shrine room on the ground floor, and above that bedrooms, and the other contains the kitchen, dining room, living room, art room, more bedrooms and a solitary retreat suite. There is a sense of light and space throughout the centre, the room are painted bright colours, there are warm wooden floors and the kitchen is a delight! I wish we had one that size and that well equipped for Trevince! Retreatants all sit together to eat in the large dining room, and there are enough sofas for everyone in the cosy living room. There is a burner at one end which provides a really nice focal point, and we gathered round it every evening for different activities. The centre is surrounded by beautiful gardens which are seen through the windows that seem to be everywhere you look. I feel very privileged to have been there at the time I was, as over the week I was able to watch the change from autumn into winter – the first few days there was no frost, the sun was still really warm and I wandered around outside with no coat. On the third morning I woke to find the world white and silent, the grass was stiff under my feet as I walked to the Tara cabin for morning meditation, and my breath emerged as white smoke. 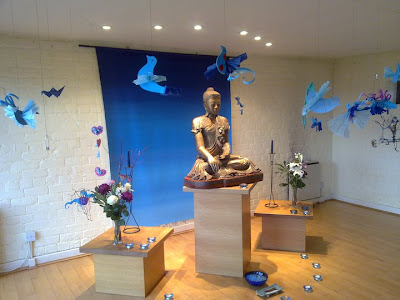 Photo with much thanks to Amitashuri

On the last morning, we all meditated together in the shrine room, doing a group Metta Bhavana. This was possibly the most intense experience of the retreat for me. We sat and did the first stage, and then, in turn Samantabhadhri, who led the meditation side of the retreat, named us all in turn, and as each person was named we concentrated our Metta on them. Going into it I felt quite blasé about it, I didn’t think that I would feel much as I find Metta Bhavana the hardest practise, but I really did! I felt so much love and warmth from everyone in the room, it really moved me. Afterwards I felt like Tigger! I had so much energy and love that I literally had to bounce around and do cartwheels to express it. I was sorry to leave, and to see the group of women who I felt such a connection with disperse, but I guess it’s another lesson in being able to let things go, and understanding that I can’t hold onto things because they will always fade and change. I came away from the retreat feeling renewed and refreshed and even more sure that following this thread is what I must, and will continue to do.

I’d like to thank Buddhafield for this chance to go on retreat, there is no way I could have gone on it without their help. I’d also like to thank Abbie for pointing it out to me and persuading me to go after I saw that I’d have to share my writing and immediately ran away from it! I’d like to thank Rosie and Mumukshu  for being there with me and last but not least, I’d like to thank all the wonderful amazing women who were part of the retreat – big sardu to you all guys!!